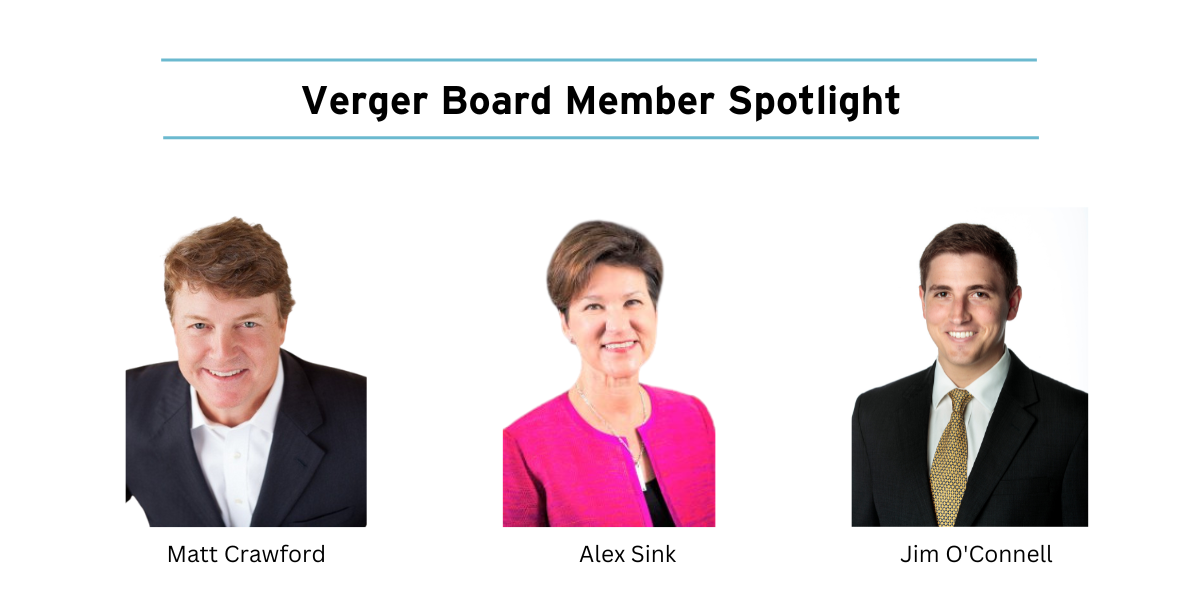 At Verger Capital Management LLC (Verger), we are grateful for the leaders who have helped shape our trajectory and path to success and will continue to help us fulfill our mission of “investing in the lives of others.”

Verger relies on our Board of Managers, Advisory Board, and ESG Task Force for a network of expertise – one that supports the core pillars of our investment philosophy, “protect, perform, and provide.” We rely on our advisory bodies for an ecosystem of accountability and best practices, one that consistently helps us integrate shared learnings into our operational and investment processes.

In celebration of these Board members’ service and their professional excellence, we sat down with Matt, Jim, and Alex to learn a bit more about the unique perspective they bring to Verger, and their impressions of working with fellow Board members and Verger staff.

Verger’s advisory body members represent a wide range of skills, expertise, and experience. As Jim pointed out, the way Verger has “layered” the Boards allows the firm to fully access the diversity of perspectives. “While the Board of Managers has specific functions to focus on, the wider group of independent advisors ensures that Verger has an opportunity to tap into the broadest array of best practices and perspectives,” he said. Jim serves as President of Partners Asset Management and a Young Alumni Trustee of Wake Forest University. He sits on a number of Boards, including Embold Health and Tampa Bay Partnership.

Matt, who founded PTV Healthcare Capital and serves as its Managing Director, shared his early impressions of Verger’s governance. “In my introduction to the Board of Managers, I’ve seen clearly that Verger takes their fiduciary duty to all clients seriously,” Matt shared. “While Verger was created out of the Wake Forest University Office of Investments and still has strong ties to the University, it is clear to me that all clients are treated the same and treated very well.” Matt has served on numerous public, private, and nonprofit Boards throughout his career, including the Children’s Council for the Dell Children’s Medical Center Foundation, and the Rise School of Austin. Matt served as a Trustee of Wake Forest University from 2018 – 2022 and will rejoin the Board of Trustees in 2023 for another term.

Alex, who serves as a Wake Forest University Life Trustee and was one of the original Verger Board of Managers members, echoed Verger’s commitment to clients and highlighted the Board’s diversity of perspectives. “Since Verger’s inception, the Board of Managers has been happy to add independent member seats. This has been an important governance feature to support Verger’s ongoing commitment to act in the best interest of all clients.” Alex, too, is familiar with Board best practices, serving many nonprofits in this capacity, including United Way Suncoast, Junior Achievement, and The Dali Museum of Art.

Connecting with the Verger Team

In addition to the breadth of experience and the commitment to excellence in Verger’s advisory bodies, Board members point to the talent amongst Verger staff members as a point of pride. As part of the onboarding process and through ongoing meetings and events, Board members have many opportunities to interact with and learn from the Verger team. Alex, Matt, and Jim used a number of common words to describe Verger team members, including thoughtful, hardworking, and open minded.

“Open mindedness is critical in the investment world. Things change so fast. The Verger team embraces this pace and is willing to pivot,” Matt shared, drawing on his extensive experience in the venture capital world. Prior to founding PTV, which focuses on growth opportunities within the healthcare and life sciences spaces, he was a Partner at Academy Fund, a venture firm based in the Research Triangle Park, North Carolina.

“Each member of the Verger team is asked to act as a leader and an owner of the Verger culture and mission,” Jim added. “They’ve structured their workflows, investment decisions, and communications to reflect this shared responsibility.” Jim has unique insight into leadership culture. He and Alex both serve on Wake Forest University’s Leadership and Character Council, which helps advance the University Program’s mission to catalyze a public conversation that puts character at the center of leadership.

Another common theme from these conversations was Verger’s commitment to its mission, to “invest in the lives of others.” A focus on Verger’s people, and the people the firm’s work touches, is clearly central to this mission.

“It is easy in the investing industry to get lost in the numbers. But CEO Jim Dunn and the Verger team always bring us back to our ‘true North,’ which is Verger’s mission,” Alex shared. “The world of investment is often obscured with technical elements and shorthand terms. This can distract from the ultimate purpose of the work,” Jim agreed. “This is not the case at Verger,” he highlighted.

“When I think about Verger’s mission,” Jim continued, “the word ‘lives’ shines through. I think about the people who will benefit from Verger’s success. For example, I went to Wake Forest University on a scholarship. Were it not for the University’s endowment, I would not have been there.”

Alex highlighted how Verger has applied its mission internally, supporting team members by investing in their professional growth and development. She pointed to the Verger Women’s Leadership Initiative (VWLI) and its grassroots founding: “I have to compliment the team, and COO Vicki West in particular, for starting the VWLI. The members have done a great job connecting staff, Board members, and clients while sharing knowledge, skills, and leadership perspectives. I want to do everything I can to help them bring more diversity to the investment world.” Alex, of course, has a strong history of supporting women in fields where they have been historically underrepresented. For example, in 2008, she founded Ruth’s List to help elect more women to public office.

Connecting with the Winston-Salem Community

An additional point of pride that emerged during these conversations was Verger’s commitment to the Winston-Salem community.

All three Board members highlighted the significance of Verger’s location and its ongoing efforts to give back to the community. They noted that as Verger continues to build brand recognition in the nonprofit investment management world, it will also support brand recognition for Winston-Salem.

“I can imagine it was tempting in founding Verger to relocate alongside its many peers in New York City or another large financial hub. Verger choosing to stay in Winston-Salem is an investment in the community and in North Carolina,” Jim shared.

Alex, Matt, and Jim pointed to Verger’s internship program as an ongoing investment in local undergraduate students – one that is important for the community and for Verger alike. “It strikes me that Verger has nurtured a culture of apprenticeship with local students,” Jim noted, as he highlighted the important diversity of perspectives interns bring to a team. Jim is quite familiar with the valuable ways that interns can contribute to an institution, having served as an intern in the White House himself. Verger offers fall, spring, and summer sessions, ensuring that, through the internship program, Verger constantly has access to these new perspectives and fresh ideas.

Alex also highlighted that, for the past two years, Verger has acted as the Community Engagement Sponsor for the Wake Forest Face to Face Speaker Forum, providing tickets to community members at no cost. “Verger as a firm, and Verger staff are viewed as contributors to the community,” Alex noted. “Staff volunteer and serve on Boards for a range of local nonprofits,” she said. Indeed, the Verger Volunteer Time Off benefit policy, along with the work of the VWLI Volunteer Committee, are responsible for teamwide volunteer days, like a recent one for Habitat for Humanity.

Vision for the Future

Matt, Jim, and Alex all agree that they are honored to be part of Verger’s path to success along with what they consider to be a talented group of team members and advisors. They envision a bright future. “Verger has already built a respected reputation in the investment world. The team is committed to constantly refining its process, and I look forward to seeing how Verger will continue to evolve and meet each new challenge with renewed strength,” Matt shared.

In noting how Verger’s ESG Task Force is helping Verger to formally establish a long-term, proactive approach to responsibly managing ESG risks and opportunities in its business and investment portfolio, Alex pointed to a recent example. Demonstrating our commitment to continued evolution, Verger recently partnered with Climate Vault to offset not only our annual corporate office carbon footprint, but also Verger staff’s personal carbon footprints.

Alex happens to be a pioneer of incorporating ESG factors into prudent investment management. When she served as Florida’s elected Chief Financial Officer from 2007 - 2011, Alex led the early participation of the Florida Retirement System in the CERES initiative to require companies to disclose impacts of climate change risk. “The Board of Managers and the Advisory Board are very supportive of the Verger team and the ESG Task Force as they formalize the firm’s ESG approach,” she shared.

As Verger continues to evolve, these Board members agree that Verger’s focus on its mission and the lives it can positively impact will drive success.

“Verger clearly views its work as a craft, and it values its people as artisans. For this reason, it’s fluid, dynamic, and mobile,” Jim added. “I look forward to seeing how this develops in the future.”

Please join us in thanking all of Verger’s advisory body members and celebrating their ongoing service to our team, our clients, and our mission. We look forward to continuing to highlight their contributions in future posts.