How Is an OCIO Different From a Consultant?
>
Is Your OCIO Equipped for a Market Downturn?
>

“Booms start with some tie-in to reality, some reason which justifies the increase in asset values, and then – and this is the critical feature of speculative mood – the market loses touch with reality.”

It was only a year ago that investors enjoyed a market boom not too dissimilar from the one described above by economist John Kenneth Galbraith. Today’s environment seems far removed from that euphoria and exuberance he describes. Rather, the market seems hopelessly adrift as fears about inflation, tough talk from central banks, and global growth concerns all weigh on investors’ minds. Despite a strong equity and bond rally in July, the broad market sell-off that started earlier this year reestablished itself in August and September. The 3rd quarter reminds us that any detachment from reality ultimately reverses course as the market’s animal spirits swing the pendulum from one extreme to another. The result is that most major indices were down significantly for the quarter and year to date. To quote Michael Stipe of R.E.M., “Everybody hurts sometimes, sometimes everything is wrong.”

Market Review: Everything is Wrong

The July market rally was born out of investors pricing in rate cuts by the Fed and other central banks in 2023. Once these central banks reiterated their prioritization of subduing inflation through continued rate hikes rather than supporting further economic growth, the markets quickly retreated. Equities were hit the hardest, particularly non-U.S. developed markets, down 9.4%, and emerging markets, down 11.6%. However, the impact was felt across most major asset classes, indices, and currencies.

While inflation moderated somewhat during the quarter, it is still well above recent historical averages and investors now face the double whammy of inflation paired with higher interest rates fueled by the central banks’ quantitative tightening efforts. The old saying is that when the Fed sneezes, the market catches a cold. Thus, the impact of the continued and substantial rate hikes by the Federal Reserve and its foreign counterparts is to be expected, particularly when taking historical trends into account. As illustrated below, over the past 40 years in the U.S. an increase in rates has often signaled the onset of a recessionary period. 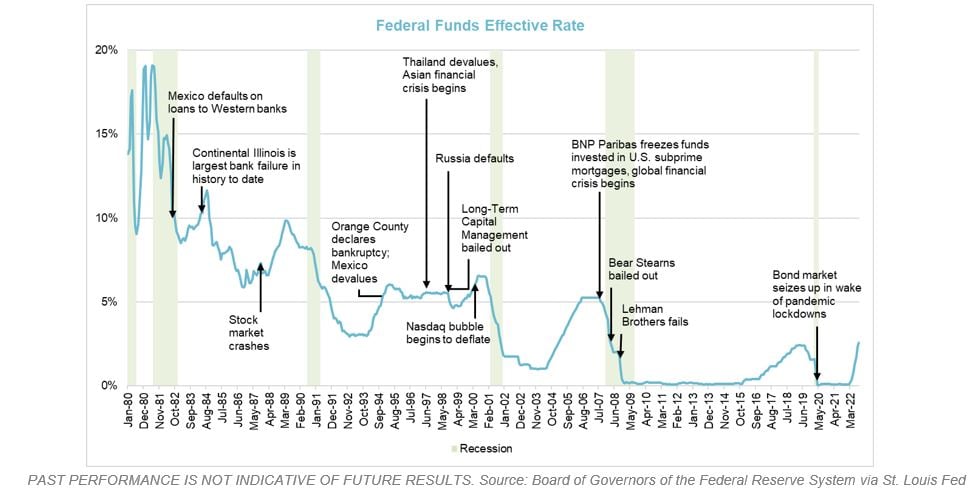 The short-term impact has been the protracted sell-off across all markets discussed above and a historically bad year for traditional equity and fixed income investors. Over the past two decades, the correlation between stocks and bonds has typically been negative, but as we mentioned last quarter, that is not the case this year. As of the end of the quarter, the S&P 500 and Bloomberg U.S. Aggregate are down 23.9% and 14.6% CYTD, respectively, meaning a traditional 60% equity and 40% fixed income portfolio is down over 20%. That is already the 3rd worst calendar year performance in history for a 60/40 portfolio, putting it on pace for its worst year ever. 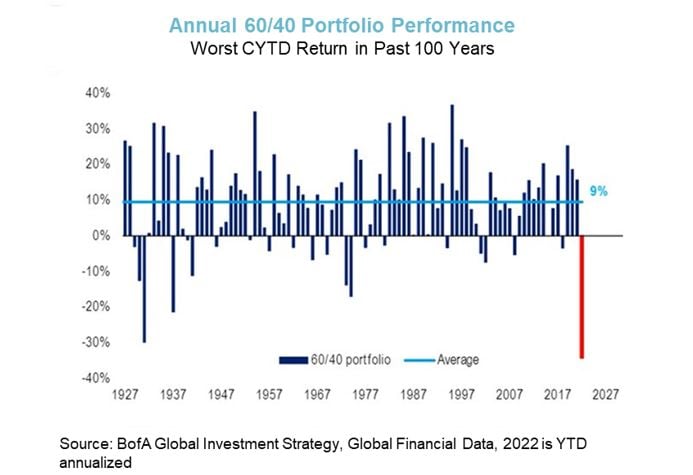 The impact of this sell off is dramatic on a percentage basis but even more so when viewed in terms of the dollar value of the drawdown in total market capitalization for the U.S. equity and fixed income markets. The visual below shows that just this year nearly $20 trillion in value has been erased from the U.S. markets, which is even more than during the 2008 – 2009 Great Financial Crisis. 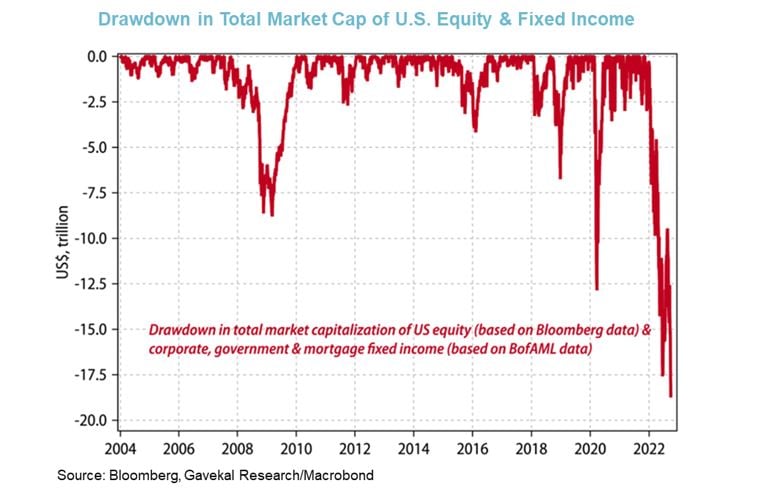 Overall, not much has changed this quarter in comparison to last quarter. There have been very few places to hide from the turmoil and the chances of recession continue to rise. Even positive economic data is viewed in a negative light as it implies that the central banks’ fight against inflation is far from over. It’s an odd environment we’re in when a positive jobs report results in a market sell-off. However, just as many underestimated the Fed’s willingness to be accommodative following the Great Financial Crisis, it seems they have also underestimated the lengths they will go to tamp down inflation.

After a pandemic and multiple financial crises, we’ve finally entered a lengthy period of rising interest rates. But while many are aware of the ominous outcomes this could create, many are still using the same 60/40 playbook or expecting a “Fed pivot” seemingly every week, only to be disappointed as central banks stick to a hawkish script. The protracted sell-off across the equity markets has significantly reduced the P/E ratio for companies of all stripes, but we don’t necessarily view this as a signal to broadly buy back into equities. As we have seen multiple times over the past 12 months, the Fed’s fight against inflation has repeatedly overcome investors’ desires to “buy the dip.” Additionally, even with markets down significantly, equities may be more fairly valued, but they are by no means “cheap” on a historical basis, particularly here in the U.S. 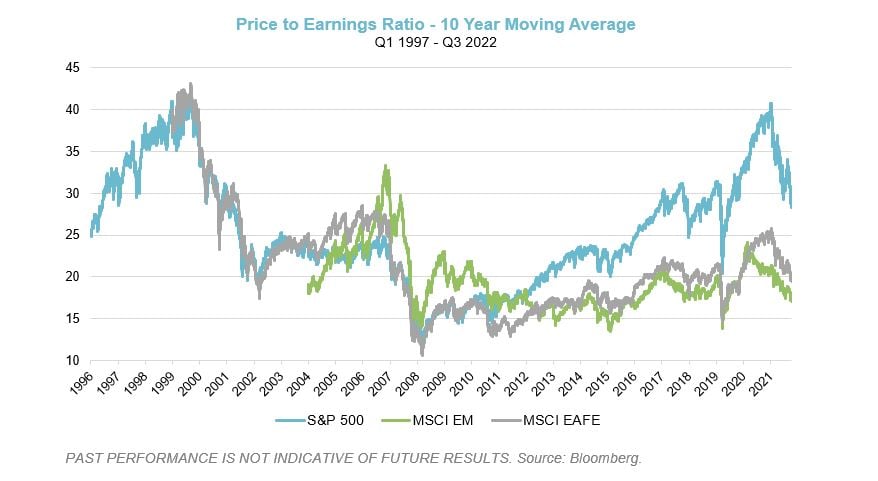 Furthermore, it is likely that the level of “E” (earnings) will decline as the economy continues to soften.  As central banks push rates higher, consumers and businesses alike face increased borrowing costs. This could reduce discretionary spending and impact earnings as consumers deal with larger revolving debt payments on everything from homes to autos to credit cards. Just look at the change in mortgage payments over the past 18 months. At the end of 2020, the average purchase price for a house in the U.S. was $403,900 and the average 30-year mortgage rate was 2.67%. Fast forward to the end of the 3rd quarter and the averages were $525,000 and 6.7%. Assuming a 20% down payment, that’s a 108% increase in the monthly payment (from $1,305 to $2,710)! 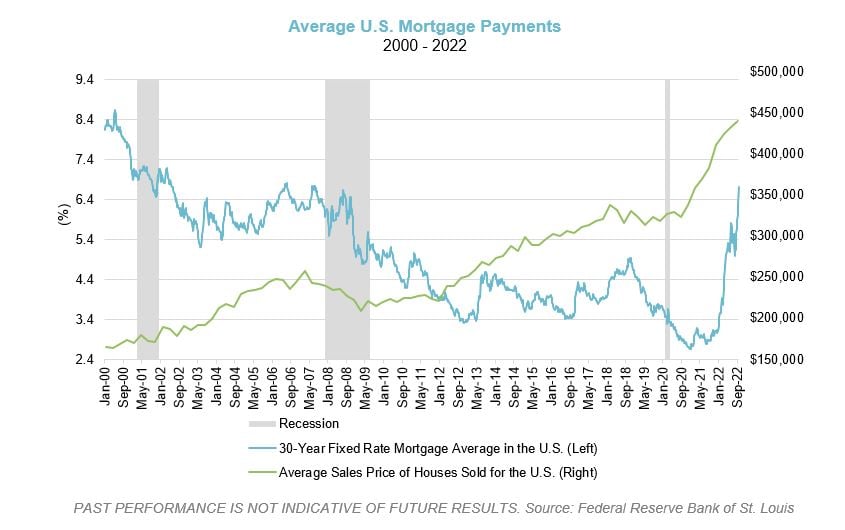 It is also worth considering to what lengths corporations will go to protect their earnings. While we have already seen some layoffs in various sectors, particularly consumer discretionary and technology, there may be an unwillingness to layoff recently hired employees. As the economy recovered from the pandemic shutdown, many companies staffed up and spent large sums to train these new workers so they may be reluctant to jettison them so quickly. This may be particularly true of companies that don’t see a recession as inevitable or believe it will be mild and/or brief. If we see a recession without significant layoffs, we may see a decline in corporate profits and earnings.

We continue to believe there is opportunity in real asset strategies going forward given the pricing, value, and cash flow generation of these companies in comparison to the broader market. While real assets were down across the board in the 3rd quarter, natural resources have held up better than the broader markets with most strategies (except for public real estate equities) still positive for the year. Despite concerns about recession and consumers’ ability to pay higher energy prices, commodities and related equities perform well during inflationary periods, as energy, as is also the case with food, is a necessity and demand tends to be more inelastic. 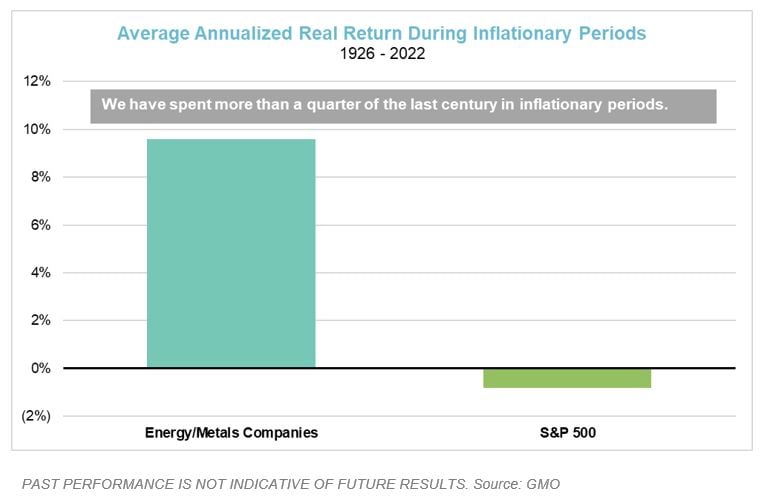 Additionally, we have seen a mass exodus from the traditional oil and gas sector following years of underperformance due to over investment in this cyclical industry along with environmental concerns. To attract capital now, the U.S. oil and gas industry has readjusted to focus on returning capital to investors and reducing leverage instead of producing at all costs. According to Deloitte, 2022 is estimated to produce the largest ever free cash flows for the industry, estimated at as much as $1.4 trillion. The recent reduction in OPEC+ production by two million barrels per day should only serve to exacerbate the global undersupply of oil and gas. We expect a significant gap between supply and demand will continue to exist over the next decade and believe energy, while volatile, continues to be a long-term opportunity. 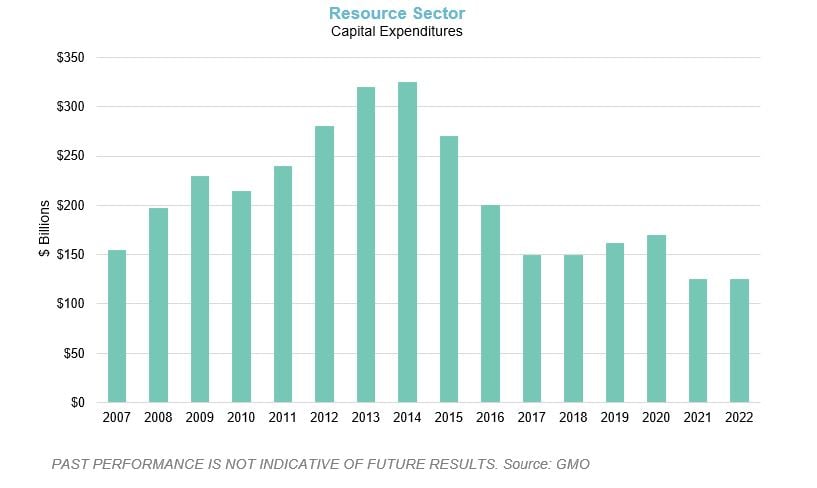 Lower and more volatile growth prospects globally, together with higher inflation and rising rates could continue to negatively impact the performance of traditional stock and bond portfolios. We still favor active management and various alternative investments, including real assets and various hedge strategies discussed above. Portfolio diversification will likely remain an important determinant of success in this higher volatility, higher economic uncertainty market environment. In this new rising rate regime, we need to be more aware of potential cracks in market participants portfolios and be ready to take advantage of potential opportunities and market dislocations.

And, finally, not to alarm anyone, but two of Verger’s employees are actively cheering for a Philadelphia Phillies World Series run. We think they should be careful of what they wish for… 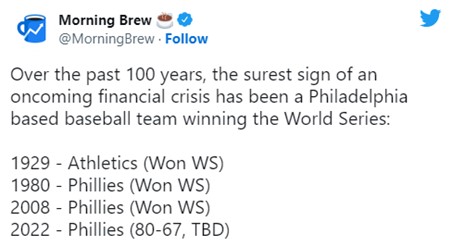 Verger’s quarterly investment webinar covers market review and outlook in more depth and is open to qualified investors. To request an invitation to the next webinar, please contact us using the form found here.

All investments involve risk, including possible loss of principal.

Not all strategies are appropriate for all investors. There is no guarantee that any particular asset allocation or mix of strategies will meet your investment objectives. Diversification does not ensure a profit or protect against a loss.

One cannot invest directly in an index, and unmanaged indices do not incur fees and expenses.

This article is being provided for informational purposes only and constitutes neither an offer to sell nor a solicitation of an offer to buy securities. Offerings of securities are only made by delivery of the prospectus or confidential offering materials of the relevant fund or pool, which describe certain risks related to an investment in the securities and which qualify in their entirety the information set forth herein. Statements made herein may be materially different from those in the prospectus or confidential offering materials of a fund or pool.

This article is not investment or tax advice and should not be relied on as such. Verger Capital Management (“Verger”) specifically disclaims any duty to update this article. Opinions expressed herein are those of Verger and are not a recommendation to buy or sell any securities.

This article may contain forward-looking statements relating to future events. In some cases, you can identify forward-looking statements by terminology such as “may,” “will,” “should,” “expect,” “anticipate,” “believe,” “potential,” or “continue,” the negative of such terms or other comparable terminology. Although Verger believes the expectations reflected in the forward-looking statements are reasonable, future results cannot be guaranteed. Except where otherwise indicated, all of the information provided herein is based on matters as they exist as of the date of preparation and not as of any future date and will not be updated or otherwise revised to reflect information that subsequently becomes available, or circumstances existing or changes occurring after the date hereof.